I find it fascinating learning more about the autonomic nervous system and how the state of it is unconsciously expressed through our face, body and voice.

Did you know that, according to Stephen Porge’s Polyvagal theory, the human autonomic (automatic) nervous system has 3 branches that have evolved over time in animals:

➡️ Ventral (Front) Vagal Complex, part of the Parasympathetic Nervous System, which is responsible for Social Engagement (connection) when we feel safe, but is quickly switched off when we sense danger.

➡️ Sympathetic Nervous System, which is responsible for Activation (arousal). When we feel safe, this gives us the energy to move and get things done, but when we detect a threat it becomes “Fight or Flight”.

➡️ Dorsal (Back) Vagal Complex, also part of the Parasympathetic Nervous System, which is responsible for Immobilisation (stillness). When we feel safe, this allows us to “Rest and Digest”, but when we become overwhelmed by a lack of perceived safety it will become “Shut Down”.

The extent to which each of these branches is “switched on” affects our facial expressions, body language and voice.

😃 When our nervous system senses safety, through a process that Porges calls “neuroception”, our social engagement system will be dominant, and we will be in “Safe and Social” mode.

We will appear welcoming, and it will show through a soft gaze and “smiling” eyes, relaxed and open body posture, deep regular breathing, and rhythmic variation (prosody) in our voice. 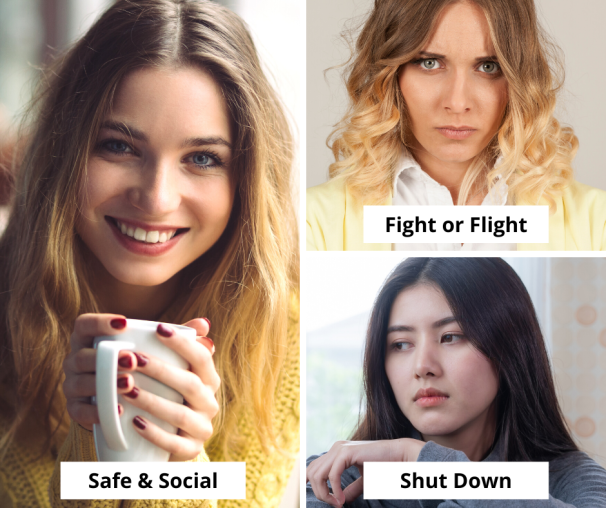 😨 If our nervous system detects “danger” in our environment (which could be triggered by anything from a sudden loud noise, to a negative thought or memory, to being blamed or rejected), our sympathetic nervous system can become dominant, and the social engagement system will be switched off.

This is “Fight or Flight”, where our body is preparing to fight or run away from the threat.

In this state, we will appear agitated, with tension in our body, eyes glaring, rapidly beating heart, fast breathing, and harsher, clipped speech.

😐 And if our nervous system starts to feel overwhelmed by the threat, if “Fight or Flight” is not working to help us feel safer, the dorsal vagal nerve can become dominant, immobilising our system.

This is “Shut Down” where movement is minimised so as to conserve energy.

In this state, we will be very still and perhaps seem absent, with vacant or downcast eyes, collapsed body posture, slow heart rate and breathing, and a monotone voice, with few words.

❓ I wonder if you recognise these states in yourself? Or in the others around you?

Note: the photos shown are staged stock photos, so won’t capture the autonomic states with 100% authenticity.

Click here to receive my latest posts, upcoming events and other relevant updates in your inbox!