Does your child ever tell you to “shut up!”? Mine does.

It doesn’t happen often. But every now and then, when he’s upset, it will come out of his mouth.

It’s a sign that he has some big feelings; he isn’t feeling heard, or he can’t bear to hear what I’m trying to say (which might be setting a limit around something that he really wants).

My son “knows” that this isn’t a kind or respectful way to speak to me. But, in that moment, he isn’t able to say, “I feel upset”. Instead, he unconsciously acts out his feelings through speaking harshly to me.

Even though it doesn’t feel particularly enjoyable to be spoken to in that way, when I am feeling resourced enough, I don’t take it personally.

👉 I can tell my son that I don’t like being spoken to in that way, but it doesn’t really help as he already knows that, and it doesn’t address the feelings underlying his behaviour.

👉 And I could try to set a “limit” around it, something like “I won’t let you speak to me that way”. But as I can’t really “make” him stop saying those words, that can end with me just feeling more frustrated and powerless.

👉 I can also try to offer him some empathy, guessing his feelings and needs in the situation, and reflecting them back with kindness and curiosity. But when he is very upset, even that doesn’t always land well.

The thing I’ve found to be most effective in getting my son back “online” in situations like this is to respond with PLAY! 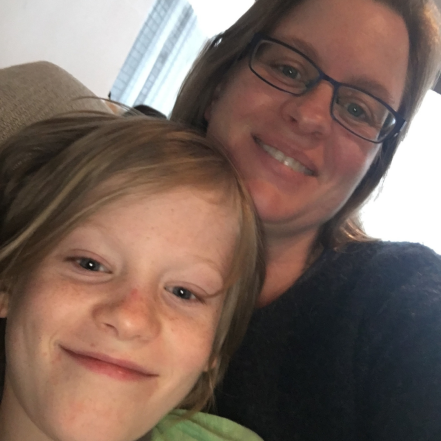 So, the other day when my son told me to “shut up!”, instead of getting serious with him, I playfully did exactly what he told me to! I shut up.

That is, I started talking through closed lips, like a ventriloquist.

“I am shut upping!”, I said playfully, while using my eyes comically to make silly expressions.

This immediately got laughs, and so I continued with it.

I am not a very skilled ventriloquist, so my lips were still moving a bit, and a lot of the words I was saying didn’t sound quite right.

This just made it all the more funny!

I joked about how good I was at “shut upping”, to which my son was able to strongly disagree, telling me how terrible I was at it! (A bit of power reversal there.)

After a little while, I picked up a nearby teddy bear and starting “throwing” my voice to him, very badly, making him say silly things, and getting even more laughs from my son.

As a result, we were now laughing, having fun together and feeling connected. The energy between us had completely transformed, and of course my son was no longer speaking harshly to me.

And we did eventually return to the topic that had originally triggered his outburst, but now we were able to speak about it in a calmer, more effective manner.

👉 Play can be so powerful in helping kids to feel loved and accepted, even in the midst of their “off track” behaviour.

👉 The shared laughter offloads stress and tension (on both sides!), and boosts kids’ sense of emotional safety and connection.

👉 Often, as a result of this, kids feel able to express their feelings more vulnerably and respectfully!

One thought on “Responding playfully to being told to “Shut up!”: The ventriloquist game!”