So last night my boy was bouncing a bit too vigorously on the sofa to the point that I thought he might damage the structure of the sofa.

🌼 From close by in the kitchen, I said to him in a silly voice, “I feel you are jumping too vigorously on the sofa!” (playful connection).

🌼 I added a bit more seriously that I thought it might get damaged, and I asked him to stop (a verbal limit).

He did it again. So I knew I had to go in closer.

🌼 I playfully “soft tackled” him onto the sofa, physically stopping the jumping (a physical limit).

🌼 I started to playfully “squash” him with my body weight (deep pressure). My boy has loved this since he was much younger, but it might not be every child’s cup of tea.

🌼 I told him gently that I was serious, and that I really couldn’t let him jump in that way on the sofa (repeating a verbal limit).

🌼 I suggested we could go outside and he could jump on the mini tramp (an alternative), but he wasn’t keen.

After a bit more squashing, he jumped up and said with a glint in his eye, “If I so much as touch the sofa, you have to chase me!”. 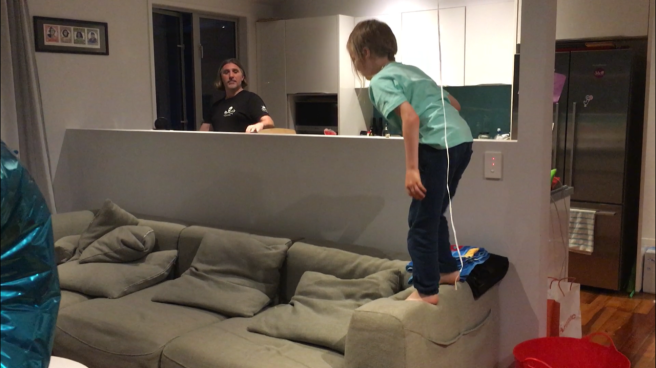 So my boy is pretty familiar with power reversal games, so much so that he makes his own up these days!

In this kind of play, he tries to do something he is not *allowed* to do, and I act outraged and exasperated.

And then I try to “get him” for it. In a sense, it is like a kind of mock “punishment”, but it is playful and warm hearted.

💝 This kind of play can really help to fill a kid’s cup with love and connection.

💝 It can also help them to work through any times when we parents might have been more angry and harsh in the way we responded to them doing something we weren’t happy with.

If you and your child are newer to this kind of play, you can initiate a game like this yourself by saying playfully with a cheeky grin and a wink, “If you so much as touch the sofa, I’m going to have to chase you!“. This is an invitation to your child to do exactly that thing, and to begin a game.

And if your child is not really catching on, he or she might need a clear verbal explanation, a sort of “stage whisper”, that says, “Yes, it’s really okay for you to do it, it’s just a game we’re playing”.

Needless to say, my boy immediately touched the sofa and then ran off.

As it was, I have actually hurt my ankle/foot recently, so I couldn’t chase him! So I explained to him, “My foot hurts, so I can’t chase you … but if you come anywhere near me, I’m gonna get you!”. (A playful tone is everything when delivering a line like this during play!)

He knew this was an invitation, so he ran past me, and I “swiped” for him, trying to grab for him, but not catching him. Sometimes I caught some of his clothing in my grip, and then let it escape through my fingers.

At the same time, I was grunting as if I was exerting a lot of energy to try and catch him, and acting exasperated that I was not being more successful and incredulous at how speedy and nimble he was.

This is the power reversal aspect. I was acting slower, clumsier, weaker and just generally more pathetic than I actually am, and he was feeling triumphant and powerful.

Throughout this, he was laughing and laughing, running in and out, darting and dodging, giving me more chances to get him. But I wasn’t doing too well!

His laughter was helping him to release stress and tension, and possibly other feelings of mild fear or powerlessness, and boosting his sense of connection with me.

Every now and then I landed a catch, and gently moved him down to the floor to squash him again, and then let him escape from me and we continued.

Once or twice, he also took the opportunity to retreat into the blanket fort that we had made together the previous night.

This is an important aspect of power reversal play, always having a “safety option” that the child can use to gain full control if he or she is getting overwhelmed or needs a break.

After a while, the game came to its natural conclusion. And my boy went to sit quietly and calmly on the sofa and read a book. A big change from the hyperactive and ”defiant” child that I had before me just a short time earlier.

I don’t always find myself adequately resourced to respond playfully in these moments. Sometimes I am too tired, stressed, irritable or distracted.

But when I do manage to playfully set a limit, the benefits are clear:

❓ I wonder what your impressions are of using play in this way in a situation like this?

❓ This was about an hour before our usual “bed time”. Do you find that your kids always seem to get revved up at this time of day?