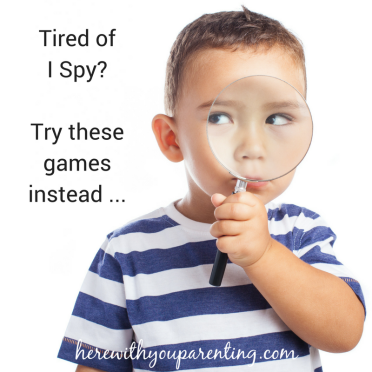 Playing games with our kids can be a great way to pass the time when there’s nothing else very interesting going on. But whether you’re sitting in a cafe or on a long car trip, I Spy can get old pretty quickly. Here are 8 alternatives to get you laughing and connecting, which will not only make the time fly, but help everyone to relax and enjoy each others’ company!

– Sing popular songs, but change the words to make them funny. When my son was younger he loved when I stuck ‘poo’ and ‘bum’ into his favourite songs. Instead of singing, “Let it go, let it go …”, I would sing, “Let it poo, let it poo …”.

– Throw a bit of power reversal in, by acting all confused when they laugh, like “What? What’s so funny? I’m just singing that song”. So not only is mummy (or daddy) singing the wrong words, but she (he) doesn’t even know it. Even funnier!

– Play the “Whatever you do, don’t say …” game. Of course, whatever the word is, they will almost certainly say it immediately. Then you can act mock shocked, “Oh my gosh! You can’t say that! Nooo! Whatever you do, please, just don’t say that word!”. And then after a while, you can move on, “Well, everyone knows that word is okay really, just as long as you don’t say …”.

– Play the “Would you rather …” game. You can take turns in coming up with options, for example, “Would you rather have a bucket of baked beans dumped on your head, or do all the cleaning up at the end of the day?”. The funnier and grosser the better!

– Play a word association game by saying, “I’m going to say a word, and you say whatever word comes into your head”. Then just take it in turns to say the first word that comes to mind. There will inevitably be a few laughs in this.

– Play a story building game where each person contributes a sentence at a time. So you can start off with, “Once upon a time there was a sausage …”. The sillier the story, the better! This is also an opportunity for kids to “shock” you or say things they can’t say in other contexts.

– Have a conversation in “gobbledegook”, an imaginary language made of funny random sounds, and using exaggerated intonations, facial expressions and hand gestures (unless you’re driving!).

– Play a “Copy me” game where one person is the speaker and the others are the copiers. And so of course the copiers have to copy exactly what the speaker says and the speaker can manipulate this to being in their favour! This is a great power reversal game too.